It had been at least a decade maybe more that I had attended a real card show. But in this economic climate and unemployed indifference a bonified offer of free is still free. So when I heard that there would be a sports card show less than an hour drive from my home I put it on the calender.

Free parking, free admission and a chance to obtain cards was enticing - all without the wait or cost of the postage nor an auction to end. I also knew that in this age of game-useded, refractornated, autofied, shortprint-a-numbered cards (makes ya think of the ole Prezident, huh?) - I thought there may be a chance to get some raw, genuine cardboard products.

In addition, I needed to shop for Red Sox as my new trading pal in England collects them. This can be vexing. Should I buy and give up the cards or send them in trade ? I finally decided I'd split the "goods" as evenly as possible. 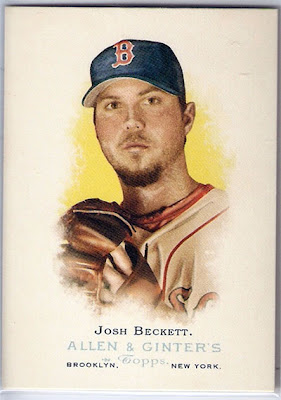 First, I found some 3 Allen & Ginter - 1 base and a pair of minis to go into my Red Sox collection. Then I found three Topps Herritage to send over the pond.

Love those minis ... makes you want to take up tobacco (just kidding kids). 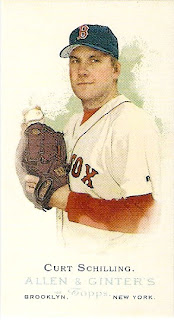 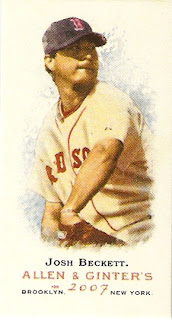 Found a Brandy Chastain (with her jersey ON) ... to go into my Ladies collection. 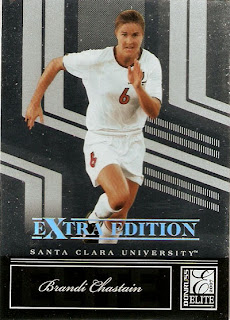 Then I picked up a few of these Topps Masterpiece hockey - just because hockey is art ... 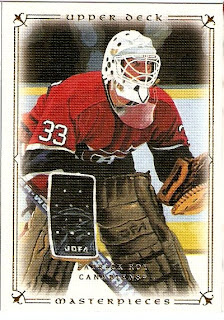 and art should depict hockey. Anyone who has these in hand knows that photos do not do these cards any justice. The canvas look and feel make them special. Picked up two Gretzkys, two Roys, a Mario and Mr. Hockey - Gordie Howe. (if anyone wants my extras - mail me) 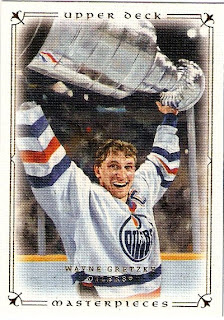 I realize the 1990's had a lot of gimmick cards, especially the hockey sets. But Pacific hockey had some of the nicest and most regal products the NHL collectors have ever seen. I've seen most of them - that is until this show. In Florida, where very few dealers have hockey, I was surprised to see so many tables that actually HAD hockey - boxes, singles, sets and high end merchandise. (if things werent going so well for the dealers I might have had a big trade)

I found this little gem in a giveaway box ! This 1997-98 Pacific Card Supial is a minaiture no bigger than you see here - and a sure Hall of Famer - Martin Brodeur.

I was very pleased at to the turnout at this diminutive card show - 30 tables worth. So were the dealers who saw brisk action with 40 to 50 buyers and traders inside at any time. A refreshing change of message boards, online auctions and even mail exchanges. It reminded me of the days of card shows past.

Being a bit nostalgic, I found a modern card that can only be described as vintage looking - a 2008 Goudey. This was a gold numbered mini card of Hall of Famer Eddie Matthews in a Milwaukee Braves uniform. 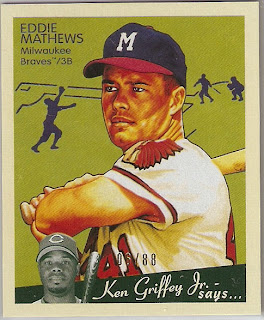 It was a nice return visit to a card show. The dialog and banter that only happens when collectors are side by side was enjoyable. I saw and learned more about what was new and ongoing in card collection in an hour of browsing than I could have in 5 hours on a computer.

hey bud... if you are looking to get rid of hockey extras... especially Roy, look no further...